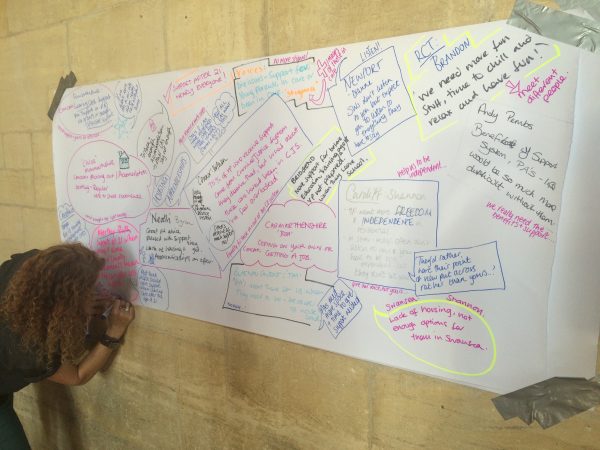 Over the last couple of weeks I’ve spent time with young people from 19 out of Wales’ 22 local authorities.

All had big ambitions for life including being a chef in the navy, being a vet, and having an acting career. Mostly they were fun, engaging, and good at listening to each other.

The only thing that all these young people had in common was that they are, or were formerly, ‘looked after’ by the local authority – what used to be known as being ‘in care’.

In two day-long events in south and north Wales, I spent time talking to these sixty five 14-21 year olds about their everyday lives and hopes for their future.

I heard about how many are supported very well in loving foster homes or by caring teachers, support workers or social workers. I also heard many stories about when they feel sad, not listened to, scared or lonely.

Although there will be a whole range of family reasons for them needing to leave the care of the family they were born into, many will have experienced early years where their basic needs were neglected or they were abused.

All will, by definition, have experienced the loss of their primary carer – often over and over again. With that knowledge, it is actually quite amazing how sparky and optimistic so many of them are, and testament to the care that they have received from foster carers and others.

However, I did hear some stories that made my hackles rise, because they relate to absolute basics that we should be getting right for every child in the care system.

A number of young people had had multiple changes of social worker. This is the professional through which the local authority vests most of their responsibility in their legal status as ‘corporate parent’. Such uncertainty makes it much more difficult for young people to open up about their emotions and feelings.

Based on what I heard from the young people, it appears that some foster carers are not always treating the children in their care as if they were their own – or at least not helping the child feel like they are.

There is a huge range of foster carers and so many of them are brilliant at going the extra mile and showing amazing love and care, but we should not be using any that do not.

One young person talked to me about how sad she is to have lost contact with a much younger sibling who has been adopted and about whom she has no information. She thinks about her often and feels so sad not to hear how she is.

This is something I have heard several times from other young people in care and I think that we could ask adoptive parents to provide updates for older siblings, in the way that many do for birth parents.

One 14 year old said he was scared he will be homeless in the future. This is not a fear that most 14 year olds in an average household will be carrying around with them.

Although some 18-21 year olds are really benefiting from the new ‘When I’m Ready’ scheme in Wales, which allows them to stay longer with their foster carer, too many are having to negotiate tenancies, bills and the loneliness of bedsits, hostels and flats on their own far too young.

Young people who are looked after generally need more support, not less than the average 18 year old, yet most of us would not expect our own children to carry these responsibilities so young.

We have known for a long time what the basics are when looking after children in care – children and young people need support, stability and safety. As a society we must ensure that looked after children and care leavers have at least the same levels of love, care and provision that we would expect for our own children.

We still have some way to go before achieving this for all children in our care.

I will be putting together all of the stories and experiences told to me by young people this summer about their lives, both good and bad, and together we will present them to the Government and Assembly Members in October.

I look forward to working with Government, the Assembly, and local authorities over the next few years in really raising our expectations and making concrete changes in how we look after children in care and after care.