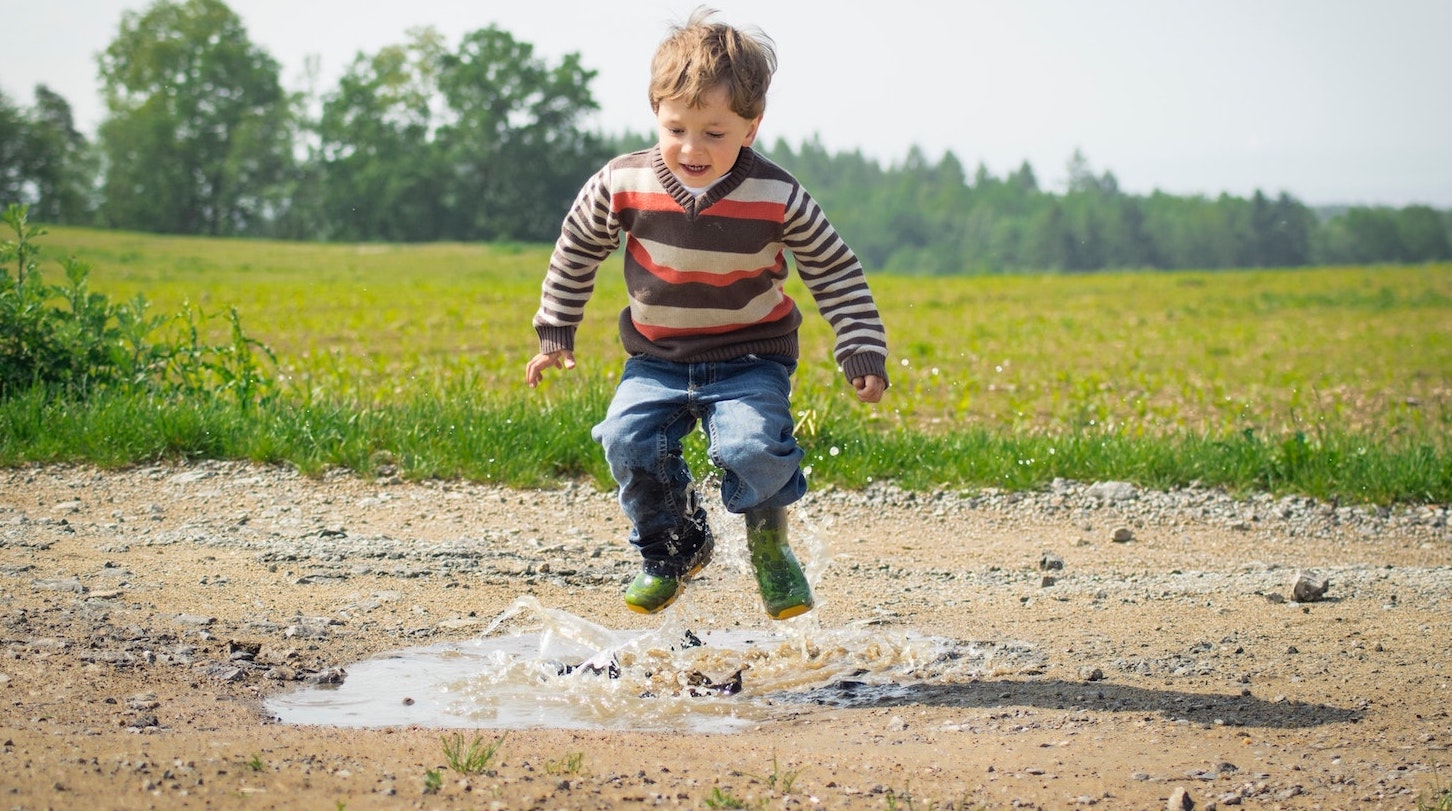 This year’s Playday is all about celebrating children’s right to play at home and in the community.

This web page has lots of ideas to help children and families discover new games to play on Playday and during the rest of summer.

We’re working with PlayWales to publish a collection of children and families’ favourite games.

They can be old classics, or ones you’ve completely made up.

We know that many of you might not have had a chance to submit yours yet, so don’t worry, we’re now giving you until the end of August to share yours!

These are some of the games you’ve submitted already:

Sit in a circle.

A person goes around and taps each person on the head saying ‘duck’ until the person chooses a person to be ‘goose’.

The ‘goose’ chases the person around the circle until they catch them.

That person then starts the game again.

One person is the wolf and faces the wall, the rest of the group stand at the back of the room and shout “What’s the time Mr Wolf?”.

The Wolf chooses a time and shouts back “It’s 2 (or a different number) o’clock. Everyone in the group  steps forward. So if the Wolf says 2 o’clock you take 2 steps forward.

Everyone is trying to touch the Wolf’s back.

If the Wolf shouts “DINNER TIME” you have to run back to the start before being caught by the Wolf.

The Wolf can’t turn around to sneak a peak until they say the time.

Snakes and Ladders by Seren

First you roll the dice. And next you move your button onto the number you get. And I ALWAYS get 6.

Then if you get to 6 you get another turn. You keep on going until 100.

Try this at home

If you want to try Snakes and Ladders at home – try drawing your own on paper and using buttons for counters.

The welly game by Ella

I put on my favourite wellies.

Then I go out into the park or garden with my Dad. We hold hands and he swings me around in a circle.

When I’m at the top of the circle I kick off my wellies and see how far I can shoot them.

When you get really good you can start aiming at things like trees or rocks.

But be careful that there’s nobody around that you could hit with your wellies!

The A to Z game by Rosie and Albert

Then player two goes through the alphabet in their head.

Then player two says the letter they have stopped on e.g. D, and depending on how hard the letter is they set a challenge for player one, like can you name 10 foods beginning with D, or 10 place names, or 5 countries?

Shoes Away! by Christian

Take turns on the swing. Swing as high as you can, pulling off your one of your shoes with the other foot. Once you’re nice and high, flick your shoe as far as you can. The person who manages to flick their shoes the furthest wins.

Make sure you’re always holding onto the swing with both hands. Make sure there’s nobody else in front of the swings who might be hurt if when you fling your shoes.

I like to count up to three before flinging my shoes and shouting ‘Shoes Away! 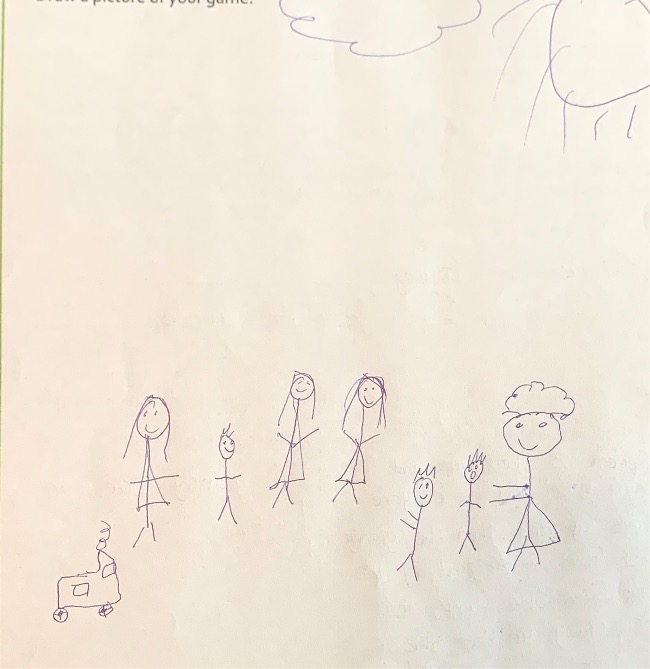 Rules of the game:  There are no rules, you can build anything.

The person draws something and gives hints while everyone else guesses it!

Rules of the game: NO CHEATING

Hide and Seek by Rosie 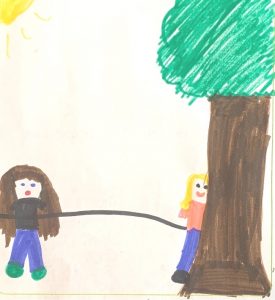 Players: However many people you want to

Rules of the game:

Once someone’s found, they can’t tell the person who’s counting where everyone else’s hiding. 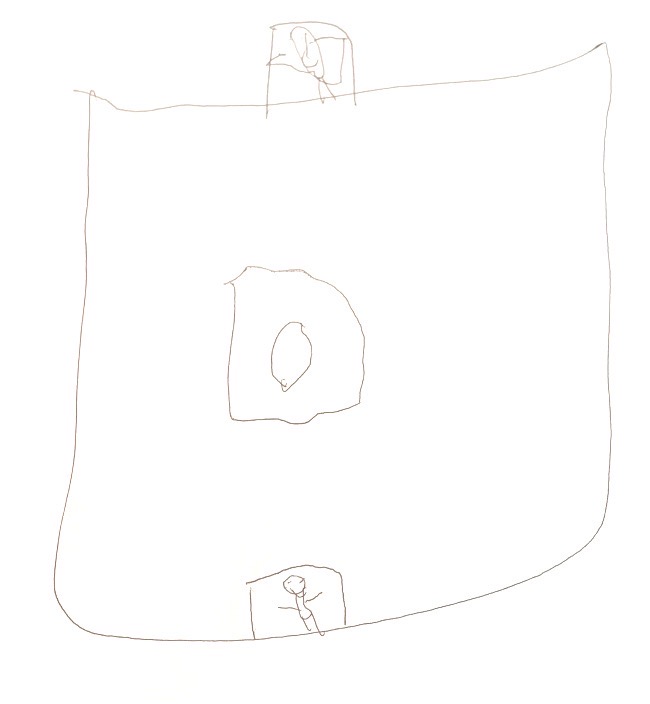 How do you play:

Kick the ball into the goal to score

Rules of the game:

Only the goalkeeper can use their hands to save the ball in their box.

Goalkeepers are able to go out of their box if they want.

Outfield players cannot use their hands

One person is on it and counts to 50 at a “home base”. The home base can be a tree or a post. Everyone else runs to hide, the person who is on it has to find everyone hiding. When they find someone they have to run back to home base and say “Mob, Mob (person’s name) caught by me 1, 2, 3”.

If you are spotted by the person whose on it, you can try to run to home base faster than them and shouting “Save myself 1,2,3”.

There are plenty of play ideas on Play Wales’ website.

They include 50 things to indoors, and videos like this one below.

Go to their site

Playing at home with help from our Participation Team

Our brilliant participation team made lots of videos to help you play at home during the lockdown, but there’s no reason why they can’t be used all through the summer.

Fun with paper and card

How much fun can you have with a container and some water? Jordan from our Participation Team is here to talk about water play:

Making a cardboard city, playing with ‘chatterboxes’, and chatting about emotions

Rhian shares her ideas on building a city out of cardboard, making ‘chatterboxes’, and starting conversations about how we feel.

Using the natural materials in your garden to make funny faces!

Jordan has some tips to keep boredom at bay!

Jordan’s easy technique for making bubbles at home. All you need is a bowl, some washing up liquid and a toilet roll tube!

Yoghurt pot castanets, toilet roll shakers, cereal box guitars; how can you use the contents of your recycling bag to start a family band!?

Is your child missing the sensory play they normally enjoy at school? Jordan has some ideas to help you make your own sensory play space at home.

Is it rubbish? Or is it play equipment!? Watch the video for some ideas on turning loose parts into free play

All you need to build a toy world is:

What can you make with toilet roll tubes?

❤️We love this ❤️Sophie from our participation team has some brilliantly creative ideas to help you turn old toilet roll tubes into fun objects.Watch the video to learn how to turn them into:🐜An insect hotel👀Binoculars🐇An Easter bunny🚗Racing cars!Brilliant!

Posted by Children's Commissioner for Wales on Wednesday, 8 April 2020