Over 1000 primary school pupils from across Pembrokeshire took part in a ‘webinar’ organised by the Children’s Commissioner for Wales. 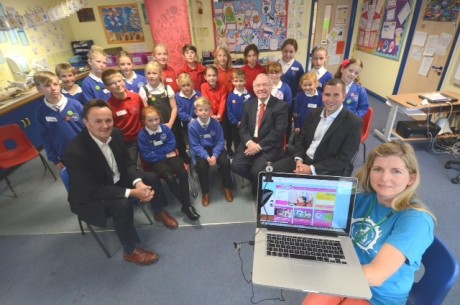 Hosted by Tenby Junior School, the online seminar introduced the Super Ambassador scheme to the county.

The live webinar was broadcast via live computer link to over 1000 pupils in 35 primary schools across the county, from Stackpole to Fishguard.

They were joined by some important faces, who were given plenty of questions by the pupils: the Children’s Commissioner for Wales, Keith Towler; Councillor Ken Rowlands, Cabinet Member for Education; and Jake Morgan, Director of Children and Schools.

“The Super Ambassador scheme aims to give pupils more of a voice in their schools and compliment the work of existing school councils,” said Councillor Rowlands. “It also enables them to gather opinions from their friends and fellow pupils on a wide range of issues, which can then be fed into the work of the Children’s Commissioner.”

As well as promoting the work of the Children’s Commissioner within their school, the Super Ambassadors also promote understanding and awareness of the UNCRC.

Councillor Rowlands said that at present 15 schools in Pembrokeshire had signed up for the scheme but he hoped that after the webinar many more would follow.