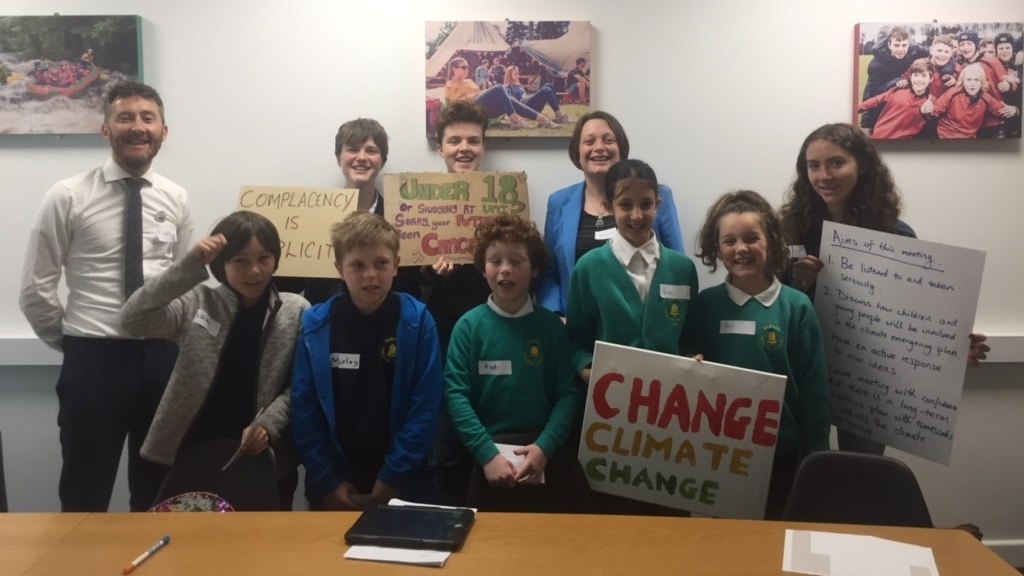 Yesterday (June 5th) my office arranged a meeting between some of the young people (from Radnor Primary School and the Atlantic College) who took part in recent climate change strikes in Cardiff and the Minister for Environment, Energy and Rural Affairs Lesley Griffiths.

The demonstrations caused a stir: many were critical of young people for what they saw as ‘jumping on the bandwagon’ to miss school while others celebrated the way in which some of our young people exercised their freedom of expression to have their say on an urgent issue.

Whatever your thoughts on school pupils’ involvement, the demonstrations’ results, attended by both children and adults across the UK, were significant. Shortly after the protests, Welsh Government announced a ‘Climate emergency’, a recognition that the environmental clock is ticking and that we need an overhaul of how we think and behave if we are to protect the world that our children and their children will live in.

I like to think that the First Minister had the chants of those children and young people ringing in his ears as he weighed up the impact on the environment of building a new motorway across a richly bio-diverse stretch of countryside, compared to improving public transport.

And for some of those young people, meeting the Minister gave them further encouragement to make change.

It was a chance to directly feed their views on what the ‘Climate emergency’ could mean for young people to the Minister and to question her on potential policies that could affect the rights and wellbeing of generations to come.

As Children’s Commissioner, I love to see the determination to create change flourishing in young people, and it’s something I’m pleased will be supported in our new curriculum.

I think many adults see children and young people as passive people who don’t pay too much attention to the political goings on around them. Some even suggest in their opposition to giving 16-year-olds the vote that they rely wholly on their parents to form their opinions.

In my experience, this couldn’t be further from the truth.

I meet young people across Wales every week who are passionate about the issues that shape their lives, from the pro-environmental eco groups that are increasingly popular in primary schools to the many social equality groups in secondary schools. The truth is that young people have lots to say. The problem is, sometimes they aren’t given the platform from which to shout it.

A real positive in the last year is the announcement that 16-year-olds in Wales will have the right to vote in elections. Whilst this is an important step, and one that will encourage more children to get involved in decision-making, it’s important that we back this up making sure children’s experience in their school and community is one in which they can be an active participant: where their voices are listened to and their voce is important.

And the activism we’ve seen in recent months from young people is something we could be seeing more of in the future.

In Wales’ new curriculum, there will be a distinct focus on developing young people as active citizens.

It means we’ll be supporting and encouraging our young people not only to take an active interest in the world around them, but to engage with and influence the decisions that affect their lives, from how their local community works to the big global issues that impact us all.

Ultimately, it’s about striving to live in a real democracy where we educate all citizens about how that democracy works, and instilling in them the desire to play their part in it.

Since starting as Children’s Commissioner I’ve encouraged public bodies in Wales to work on a Children’s Rights Approach: it has five distinct principles, all linked to children’s rights, including Empowering Children, and Accountability. Its aim is to build a society that listens to children, where children have the power to consistently influence decisions, and where crucially, there’s an expectation that children will be able to challenge the decisions they don’t agree with, and where there they can clearly see the results of their input.

It’s why I was so pleased that some of those climate protesters were able to meet with the Minister. Not only did they have the excitement of having their say in the rallies that recently lined our streets, but they also saw that action’s impact.

As we move forward in Wales, I hope our new curriculum will support and encourage many more of our young people to participate meaningfully as citizens of today.

I look back at my own education, which is (thankfully) a long way away culturally from where we’re at today.

In my school, we were taught to shut up and listen. We were certainly not what I would call ‘active citizens’. I didn’t develop the confidence to speak up for myself for very many years.

That’s not what I want for our children.

I was proud of those young people who wanted to make a difference, and I’m excited that they are our future.