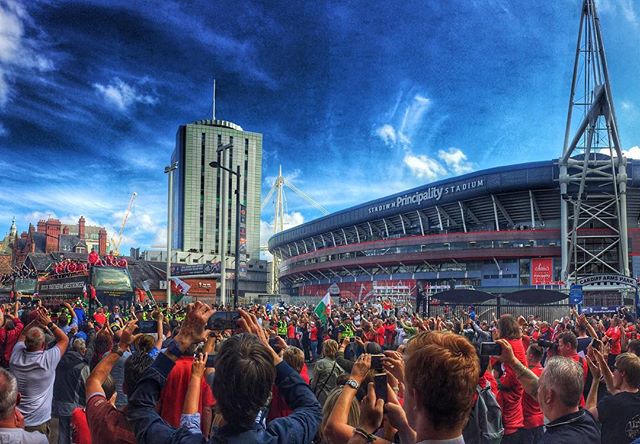 Like the country as a whole, I am still radiating with joy, pride and gratitude for the achievements of the Welsh football team during Euro 2016.

Whilst so many of us were fortunate to be able to build the red wall in the pristine French stadia we encountered, it is fair to say that all of us who are Welsh, at home and abroad, were able to revel in our successes on the pitch, inclusive of around 600,000 Welsh children who stayed up late to watch each game, and wear red with pride as they talk with admiration about Ramsey, Bale and Robson-Kanu in schoolyards and communities across the land.

Others have rightfully spoken about the potential impact Wales’s success will have on the football playing numbers for Welsh girls and boys, as well as the marketing and economic impact that we might enjoy following on from the tournament. You can read more here on how teachers and sports teams are capitalising upon our magical moments.

In this post I want to talk about how the politicians and policymakers in Wales should take inspiration from the football team, to deliver for a generation of children who have been enthralled by the heroics of our country’s finest.

Let’s remind ourselves of Chris Coleman’s words, following the monumental victory against Belgium in the QUARTER FINAL of the EUROPEAN CHAMPIONSHIPS:

“Dream – don’t be afraid to have dreams. Because four years ago I was as far away from this as you can imagine and look what’s happened.

Management consultants and self-help book writers will be dining out on these lines for years to come. However it is our politicians who should be tattooing those words to their chest, or pinning them to the walls of their meeting rooms at the very least.

We could apply those words and the football team’s endeavours to a range of children policy areas, but I’ve focussed on the ongoing issue of child poverty.

The number of children living in poverty has stubbornly remained at around a third of Welsh children for too long.

To truly tackle child poverty, we need a long term approach, with balanced attention to financial resources and service provision. Too often do we hear that Wales doesn’t have enough of the levers to address child poverty, and we look to the UK or EU governments as the route to funds in order to eradicate child poverty.

Whilst it is true that tax and benefits have an enormous potential to alleviate poverty, if we have a clear vision and belief that we can truly end child poverty here in Wales, through our own sheer hard work and effort, allocating resources wisely and strategically, we will move closer towards our vision than we have previously done.

Child poverty can no longer remain a political football that gets kicked up and down the M4 corridor between governments.

What was more apparent than anything from watching Chris Coleman’s men in action throughout the whole tournament, was that the players believed in each other and their leader, and he believed in them and his supporting team.

This belief and bond was the result of years of interacting, learning and developing, as his players were protected and promoted as the agents of the change that Coleman wanted to deliver.

Whilst our footballers kept us in Europe longer than many expected, one of the biggest dangers following the EU referendum result is the level of disappointment and frustration felt by young people across Wales and the UK.

Yougov statistics reveal that 75% of 18-24 year olds across the UK voted to remain, and there is a clear democratic duty on all politicians and policy makers to listen to these young people’s voices, as well as those 16 and 17 year olds who wanted to vote but were denied the opportunity.

It is now vitally important that all governments engage directly with children and young people to prevent disenfranchisement, regarding them as agents of change and not merely as passive recipients of services.

Whilst working with, and advocating for children and young people who are affected by social inequalities is a key work strand of ours at the Office of the Children’s Commissioner for Wales, it is ultimately down to government to take solution focused actions for those whose lives could be improved through considered interventions.

Following the EU referendum result, we make a direct ask of the Welsh Government to emanate our reinvigorated national confidence as they negotiate replacing EU funds for Wales’ most disadvantaged regions, and truly prioritise lifting the life chances of Welsh children in their budgets and policies, especially those whose lives have started out on an uneven playing field.

By daring the nation’s children to dream without fear of failure, Chris Coleman and the Welsh football team have inspired the whole country with their pride, passion and determination to succeed against the odds.

If we believe in ourselves, then the emotions of celebration and hope enjoyed throughout Wales and Europe during this tournament will serve to lead generations of Welsh people on to dream big and believe in our abilities to be the best that we can be, forging a confident society who are, indeed, Together. Stronger.