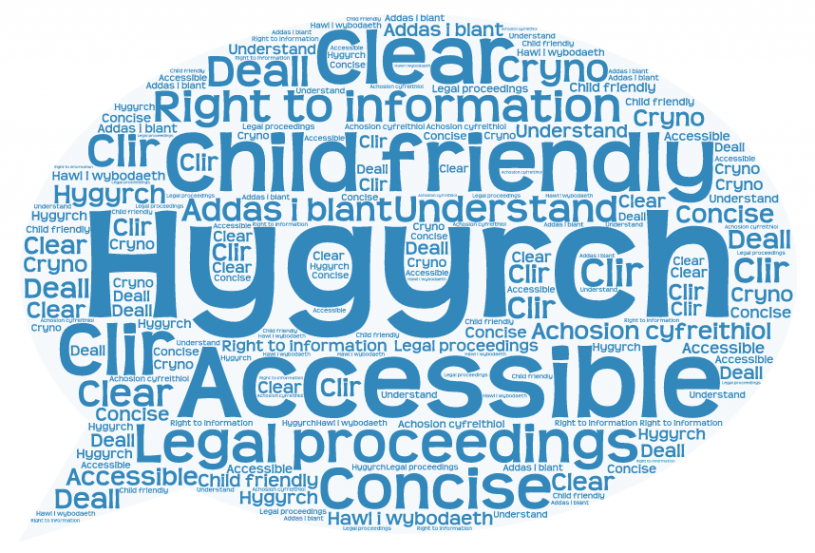 Creating content that is accessible to children and young people is something we’re seeing more and more of, but rarely do we associate ‘plain English’ or ‘child friendly’ versions with legal proceedings.

However, judges are now being encouraged to publish the reasons for their decisions (judgments) online, to try to explain the court processes and what happens when they hear a case in the family court.

Care proceedings are taken in the family court when local authority social workers are worried about the level of care being provided to a child by their parents; if it is likely to cause that child significant harm or has already done so.

The possible outcomes of these proceedings include taking the child into care until they turn 18, or placing the child for adoption.

Children are never present in court when these major decisions are made about where they will live until the age of 18 (and beyond) but the local authority has their own solicitor, as does each of the parents, and parents will be asked to attend court and participate in the hearing.

They are represented in court by a lawyer and an independent children’s guardian but, regardless of their age, they are never there to hear what a judge has decided and more importantly the reasons for this decision.

This can leave many children without a clear understanding about their experiences and decisions that have been made about their future.

We know that for many adopted children or those in long term foster care they are often unaware of their life history because information is missing or an adult decides it doesn’t feel like ‘the right time’ to talk about big things.

So how can children and young people find out exactly why it is that they cannot grow up with their birth parents or within their birth families?

Well, a judgment from Mr Justice Peter Jackson has recently been published and is gaining much attention for the fact that it is written in plain English and was deliberately kept “as short as possible so that the mother and the older children can follow it.”

The case was heard in court in February 2016 but the report has only recently been published.

Four children were removed from their parents’ care following a suspected failed journey to Syria.  There were also concerns that the father of two of the children (Mr A) held extreme views and the effect that these might be having on the children.

The judgment gives all the background information and facts about why the children had to be taken into foster care, and then goes on to talk about the evidence that the Judge has heard in reaching his final decision.

There are also some clear principles set out in paragraphs 6-9, which support the aims of transparency in the process, as follows –

The outcome of the case is that the children returned to live with their mother and grandmother, but the judgment sets out why they had to live in foster care during the proceedings, and the high level of concerns that mean that their contact with Mr A should be limited and not face to face.

It also helps their Mother to understand the nature of the risk that Mr A poses to the children, so that she can fully protect them from significant harm in the future.

Whilst this post isn’t intended to comment on the complex nature of the issues involved in this case, we do feel obliged to draw attention to the use of language and the positive steps being taken to explain a decision that will have a lasting impact on these children in such a way that they will understand what has happened to them and why.

Whilst there may be other examples of plain English judgments like this, in my time as a law student and as a practising childcare solicitor, I have never seen a judgment written in this way.

Judgments usually contain lots of paragraphs setting out the legal principles behind the Judge’s decision, but these rules do not change from case to case.

What is different in every case is the circumstances and personal information about the family and that is what needs to be reflected in judgments to make sure they are personal to those who they affect.

Children have the right to access this information whether now or in the future, and I hope that this approach becomes standard practice in all such cases.

Rachel is a law graduate from the University of Warwick and has practiced as a childcare solicitor. As a Policy Adviser for the Children’s Commissioner for Wales, she leads on work in relation to Social Services, Communities and Justice.